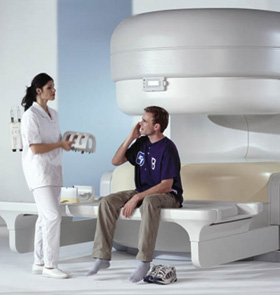 PARAMED and IECO to cooperate in new "Open" MRI System

Paramed Medical Systems in Genoa, Italy and international Electric Co (IECO) in Helsinki, Finland have signed a purchase agreement where IECO supplies Paramed with its Gradient Power Amplifiers and related equipment for ParamedÂ´s new MROpen System. Paramed selected IECO for the availability to fulfil the evolving requirements of such a new project, and the unparalleled performances of its products.

ParamedÂ´s new MROpen System is a revolutionary platform that turns traditional MRI instrumentation on its head. In addition to introducing an intriguing new open-magnet configuration, the company's design also incorporates a new type of superconducting material that could lead to more compact, economical scanner designs.

ParamedÂ´s MROpen system, which employs a cryogen-free 0.5-tesla superconducting magnet in a U-shaped configuration, is designed to reduce claustrophobia by creating open space above the patient's head and body. The MROpen will be displayed at the RSNA 2008 exhibition in Chicago (North Building, Hall B, booth # 9139) and its first deliveries are scheduled for the beginning of 2009.

"We are proud that Paramed has selected IECO as its key supplier regarding its new MROpen platform. MROpen presents a new approach in MRI system design and due to its openness, we are excited about it and expect that it will have a good reception in the market place", says Kimmo Alho, President of International Electric.

Paramed Medical Systems has been in Health Services and Medical Systems manufacturing since 1998. Their focus has been selling advanced systems for medical imaging, included MRI, DR, PACS and special software. ParamedÂ´s success comes from a strong commitment to customer satisfaction backed by years of experience, particularly in MRI. Currently, Paramed has more than 80 systems installed in Europe and the US.

International Electric Co. (IECO) designs and manufactures state-of-the-art electronics for medical, industrial and military applications tailored to meet customer needs. It holds a strong expertise in supplying Gradient Power Amplifiers and related modules for the Magnetic Resonance Imaging (MRI) applications. During the last 10 years IECO has delivered over 700 MRI gradient amplifiers throughout the world through its customers. IECO is based in . www.ieco.fi.